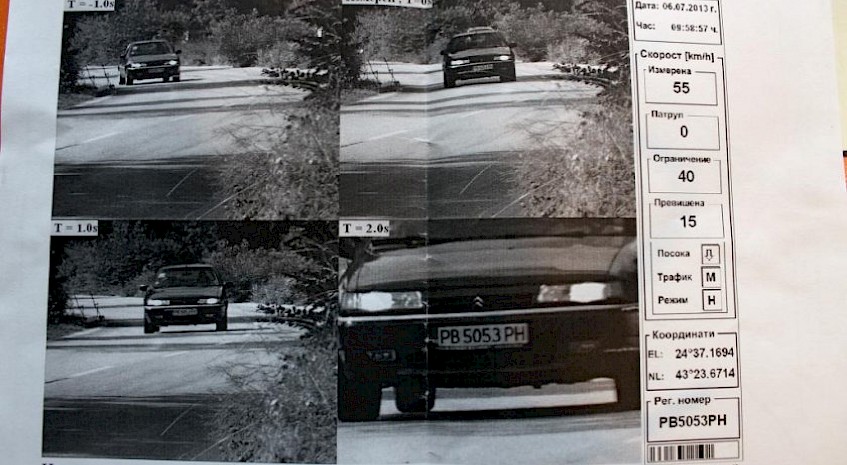 It is more and more common for legal services to be sought in the office on the occasion of electronic slips issued against them. The widespread opinion among people that they are not subject to appeal is incorrect, regardless of the amount of the fine. The Road Traffic Act provides for this within 14 days of its receipt, and you do not owe a state fee for the appeal. In addition, it is only possible to reduce or cancel the penalty imposed, but NOT to aggravate it.

1. The date, time and place where the alleged administrative infringement was committed must be specified.

- This is mandatory in view of the right of defense of the offender, who may object that at the time of the offense he was not there, or that he personally used the car, and third parties in view of his right to declare at that moment it was driven by another driver.
2. It is necessary to write down the legal provisions that have been violated by the act, full correspondence between the digital spelling of the respective article and the factual description of the committed violation.
In most cases it is a question of exceeding the allowed speed, in this part of the electronic slip the description of where the violation was committed should be placed:

- in or outside a settlement;

- the speed detected by the technical device and the permitted speed;

- what is the difference between the two;

- by what means the infringement was measured and whether it has passed a technical inspection.
The registration number of the car and its owner, and it is of particular importance that the number and car taken with the appropriate technical device match the one written in the electronic form, in order to assume that there is a match between the photo material and the text description of the violation. It should be noted that when the owner of the photographed car is a company, the data of the company itself should be indicated, such as name, legal form, address of the registered office and its representative - manager. Otherwise, there is a discrepancy between the owner and the punished person, which is grounds for revocation of the act.
These details should be specific and well defined. All discrepancies and discrepancies lead to defects in the slip, respectively to a violation of the right to defense and mainly in case of appeal, the electronic slip to be canceled.
Next: What violations can we rely on when appealing an electronic form?
Prior to the changes in the Traffic Act, the main reason for cancellation of the appealed electronic fiches was the requirement for the violation to be established by technical means, in the absence of control bodies, ie all recorded violations by traffic police patrol cars were automatically considered contrary to law. Following the relevant legal changes, this point has been cleared and violators can no longer rely on it.
On the other hand, the following possibilities remain, which are also the most common grounds for cancellation when appealing an electronic slip:
* Lack of evidence in the case of where exactly the recorded violation was committed on the basis of coordinate data, for which the offender is not obliged to have knowledge.
* Lack of marking with the appropriate road sign E24 at the place for video surveillance in order to comply with the provision of Ordinance № 8121z-532 / 12.05.2015.
* The imposition of a fine with the electronic form on the legal entity owner of the captured vehicle, which is contrary to the provision that this violation is imposed only on individuals. In this case the fine is imposed on the manager of the respective legal entity.
If the person identified as the offender proves that he did not drive the car, was elsewhere, even if he could not indicate who drove the vehicle, the appealed electronic form should be revoked, as far as the sanctioning body is obliged to prove violation, not the citizen proving his innocence.
Lack of properly kept file regarding the reflection of the technical condition, performed initial and subsequent metrological inspections, as well as provision and receipt of the measuring instrument for / from repair.
The district court, composed of only one judge, hears the case on the merits and rules with a decision by which it can confirm, amend or cancel the electronic form.

If an electronic slip is issued against you, you want to know if you have grounds to appeal an electronic slip and if there are violations in connection with your administrative penalty, you should contact a highly trained specialist - a lawyer who through his experience and routine will lead to your successful legal protection and assistance before the authorities.

Do they benefit from the non-sequestration under Art. 446, para. 1 of the Civil Procedure Code, the benefits under the employment contract?

I do not have a document of ownership of the property

Defense before the court in Order proceedings and before the PEA in enforcement cases.